skip to main | skip to sidebar

Prayer for My Enemy -- World Premiere

To say that this play is powerful, or compelling, would be to risk drowning it in the clichés of a reviewer who has seen many “powerful” works of theater. This play is indeed powerful and compelling (despite those being clichés), but it is, above all, truthful.

Craig Lucas’ Prayer for My Enemy begins with the surprise reuniting of two young men, Billy Noone (Daniel Zaitchik) and Tad Voekl (James McMenamin), who had been best friends—and each other’s first love—in school, but entirely lost touch. They meet the night before Billy leaves for . At Billy’s going-away party, Tad is thrown back into contact with Billy’s family—his bipolar father, Austin (John Procaccino), his mother, Karen (Cynthia Lauren Tewes) and his sister, Marianne (Chelsey Rives). Tad renews his relationship with the Noone family, while Billy is in , only able to talk to them over the phone. The dynamic becomes tense and disordered because of Billy’s experiences in , Tad’s habits and confused desires, and the inability of anyone in the family to say what they really want to say.

Within the scenes and human interaction that Lucas writes, he also gives voice to his characters’ internal thoughts, letting them speak them out loud as asides to the audience. These are not asides like Shakespeare’s, which are rarely and quickly said. Lucas’ asides are insights into a character’s real reaction to a situation. They happen sometimes over the top of others’ speech, often become monologues in themselves, and give the audience a chance to see further into a character than usual. In the midst of conversation, argument, or (otherwise) silent scenes, the audience hears what characters are thinking at any given moment. However, because these asides are visceral reactions, other characters will occasionally intuit things they cannot hear. The audience hears in the character’s minds what other characters read from their faces and silences. These “psychic asides,” as Lucas calls them, create a distinction between the way characters are seen by others the way they are seen by themselves (and in this case the audience).

A sixth character, Dolores Endler (Kimberly King), interacts only with the audience for most of the play. Her monologues tell us the story of returning to her childhood home in the country to care for an ailing mother, while dealing with her often frustrating relationship with the absent Charles, a workaholic psychiatrist in the city. Because Dolores converses only with the audience, all of her lines are analogous to the other character’s “psychic asides,” and we do not get the other/self distinction that the rest of the characters create. Until nearly the end, she seems to have a storyline quite unconnected to the rest of the characters. 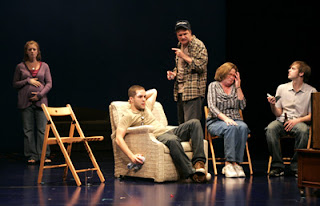 Bartlett Sher’s direction is nearly undetectable, which is of course the sign of brilliant direction; the staging is clean and crisp and uses everything to its best effect. John McDermott’s set—at the beginning a simple, blank thrust stage—is created by taking various props (a couch, bed, a TV, chairs, etc) on and off as they are needed, which lends a sparse feel to the production, complementing the complexity and rawness of the characters. The lighting (Stephen Strawbridge) and sound (Stephen LeGrand) are similarly crisp and effective, creating spaces out of blank stage. For example, in the first scene, Billy and Tad meet at a gas station, which is composed only of the two actors, mimed gas pumps, and the precise sounds of the environment around them, including the beeps of the credit card machine. The actors are each phenomenal. They make Lucas’ unusual asides as natural as any other lines, and they inhabit their characters to perfection. All this combines to support the story and create a seamless, whole production.

’s last monologue is an outpouring of disordered, desperate lessons spoken to his son, things learned too late in ’s life, but with the potential to help Billy, if he could hear them. In essence, he tells us nothing we do not already know. But he reminds us, forcefully and eloquently, of the few clear and simple things that should guide our actions, interactions, and choices; of how we should be in the world. “Charity. Civility. Sacrifice. Contemplation. Those are the pillars of human history,” he says; we can only hope that this is not lost on Billy, Tad, Marianne and the rest of those who still have the ability to change the world.

Promote Your Page Too